Mount Rinjani – A hike you will never forget! All I can say in advance is: the hike is full of struggles but they are totally worth it.

As many of you may already know, I am from Switzerland and Switzerland is full of mountains. The highest and also longest thing Zakir and I climbed was Pizol, the famous 5 lakes hike. It was beautiful despite the 6 hours of walking, but the pain in our legs the next day was not. To cut to the chase: Zakir and I could barely climb stairs for the next few days. But as the saying goes, one likes to suppress the negative events in life. And so the story took its course.

One day I woke up and thought: why haven't I climbed Rinjani yet? I've been coming to Lombok since 2014, thought about it several times, but at the same time thought I couldn't handle the altitude, so I always decided against it.

But then the day came and I decided to climb Rinjani, for three days with three other women (Zakir, unfortunately, didn't push away the negative memory of the Pizol climb as quickly as I did). I was super excited. After writing to the guide and making a deposit, the moment of truth hit me hard. Doubts arose, such as not being able to handle the altitude, dying of altitude sickness (which can be very bad, by the way), hating sleeping in a tent, and of course the most important point, "where do I go to the bathroom?!". 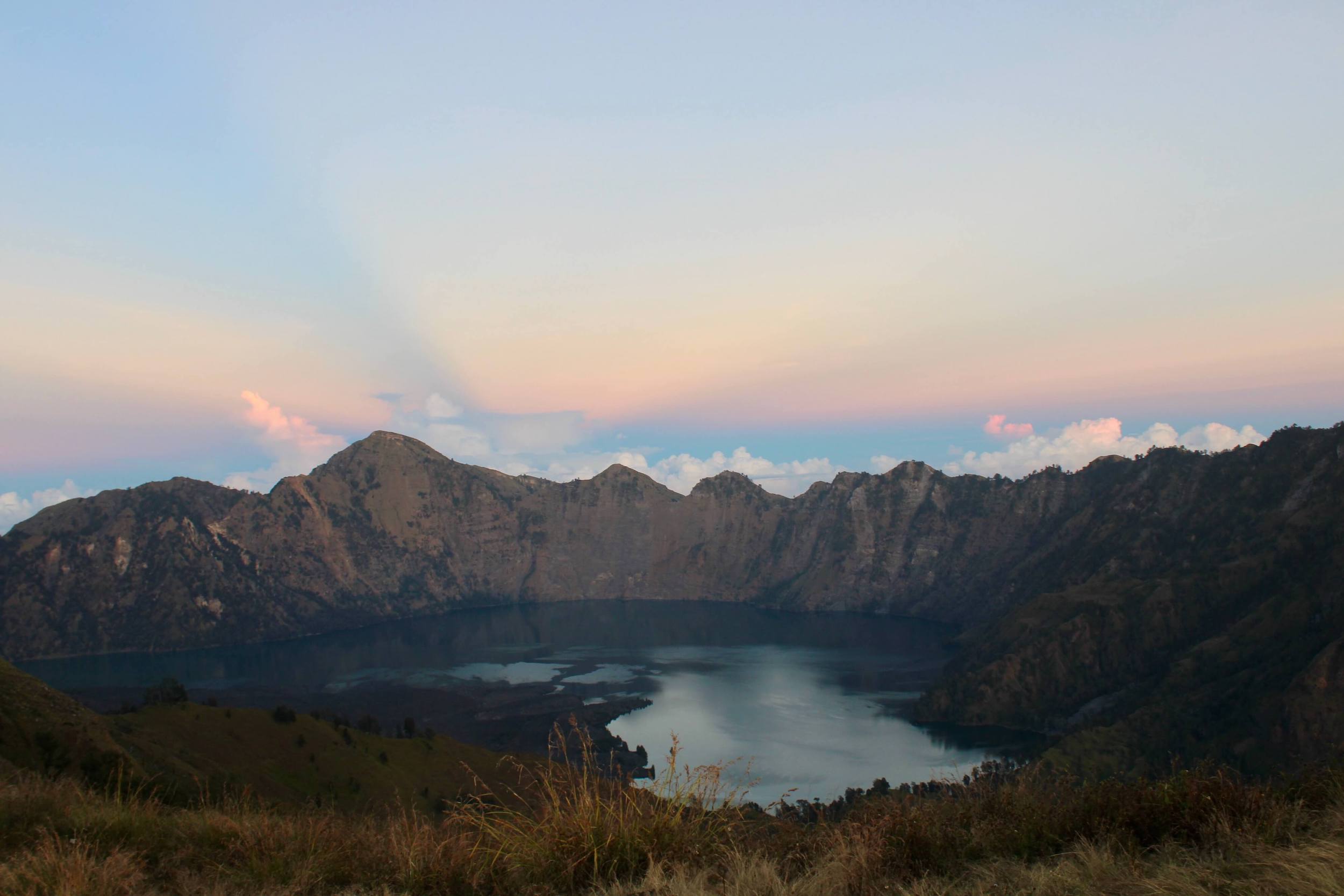 What can I say, the day started well: Departure from Gerupuk at 3:30 to Sembalun (about 3 hours), then ascent to Sembalun crater over 6 hours. Can you imagine how beautiful the view must have been? Yes? Good for you, because all we saw in those 3 hours was fog. Luckily for us, it started raining when we arrived at 2500 meters above sea level. Lying on a thin mat in our sleeping bag (at what felt like 5 degrees) we tried to mentally prepare for the morning (2 am) summit climb (another 1000 meters up), which unfortunately failed miserably. And to say it right away, our guide was not particularly sad about it ... 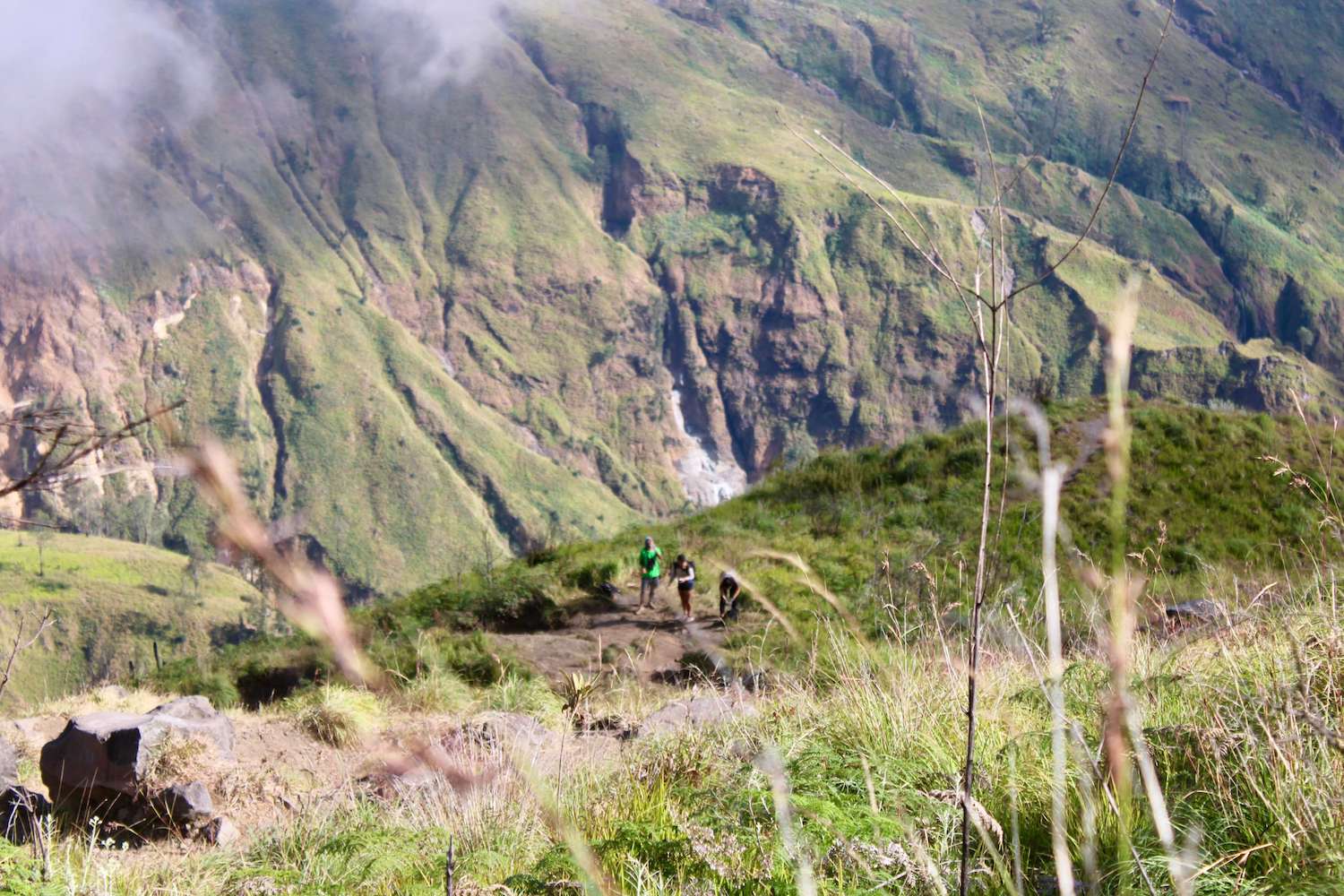 Full of energy, despite a sleepless night (the sleeping bag didn't close, at 5 degrees!), we started the next stage. 700 m downhill in 3 hours to Segara Anak Lake and then another 600 m uphill in over 2.5 hours. The first stage was great, because, unlike the first day, the view this day was intoxicating. Flora and fauna were a dream. Mantap jiwa, as the Indonesians say. The second stage, on the other hand, turned into a nightmare. First, the path was steep as hell, slippery because it obviously had to start raining and well, the paths were basically only 50 cm wide and on one side it went down cliff-like. Yes, it's not quite that bad, or so I thought because theoretically there are always safety ropes, which would also be handy if they weren't so long that you could swing down half the cliff like Tarzan. 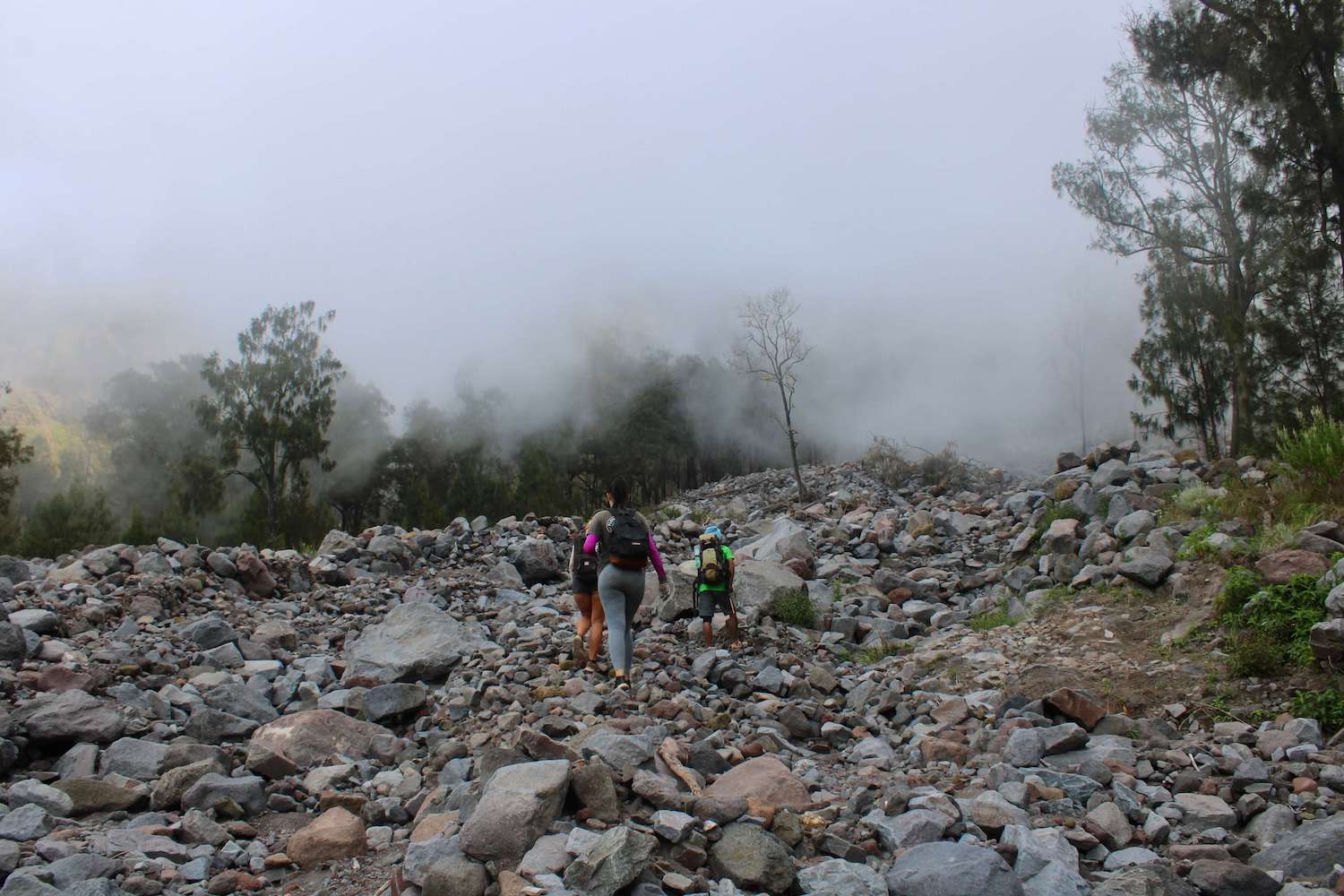 But you have to make the best of every situation, which means breathing in and out briefly and forgetting your fear of heights. However, that only works until the moment you reach the stairs of hell. Yes, the stairs of hell. A freestanding, suspended iron staircase anchored to a stone wall. WTH (excuse my language, but that was my first thought). And something like this in Indonesia. My head was spinning because anyone who has ever been to Indonesia doesn't appreciate the quality here because there usually isn't any. You start sweating even though it's only 5 degrees and raining, climb up a steel staircase on all fours (hello rust), and are glad you survived it, only to find out that your guide (who also has panic written all over his face) lied to you again and that there's not only one staircase to hell, but another one that's even shittier. Thanks, Yusuf!

After surviving the stairs of hell, we reached Senaru Crater and the sun finally showed itself. What a relief. We were hurting, but the sun on our face, with a tea in our hand and one of the most fantastic views of the volcano, made us forget our pain within minutes and we felt the pride rising up in us that we made it and surpassed ourselves. The sunset was magical and we all fell into our sleeping bags shortly after 8 pm and slept like babies this time. 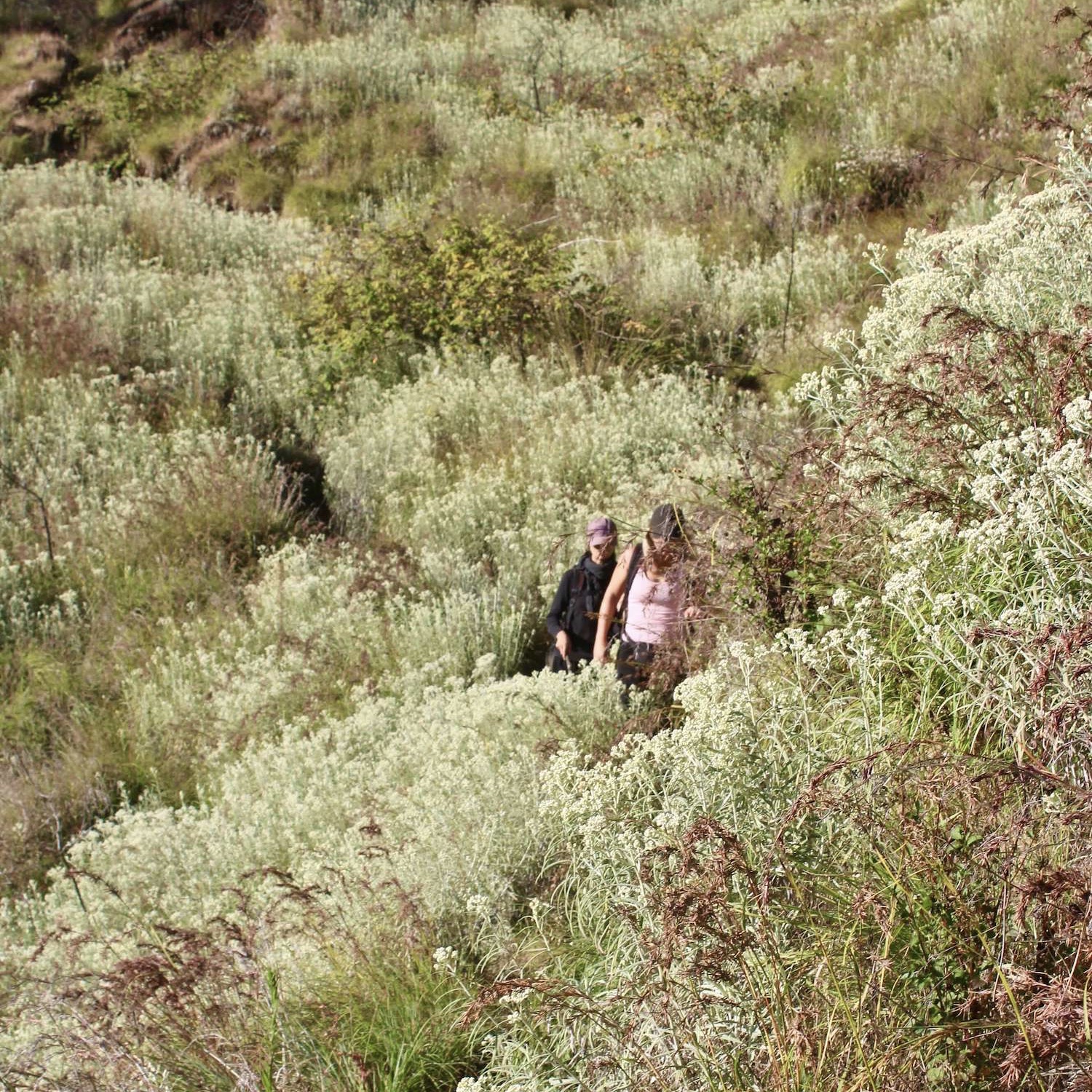 After breakfast, we started the six-hour descent. Our legs hurt so much, you can not imagine. Our legs were like rubber, you don't feel them anymore, but you know that you can't stop, otherwise you won't walk at all. But what can I say: What a view. We hiked through nature, of which one did not even know that such a thing exists on Lombok. Fields full of edelweiss, pure jungle, so many different landscapes in the shortest time. It was so magical. When we finally reached the Senaru Park entrance we were dead. We didn't want to take another step and we were glad when we sat in the car. 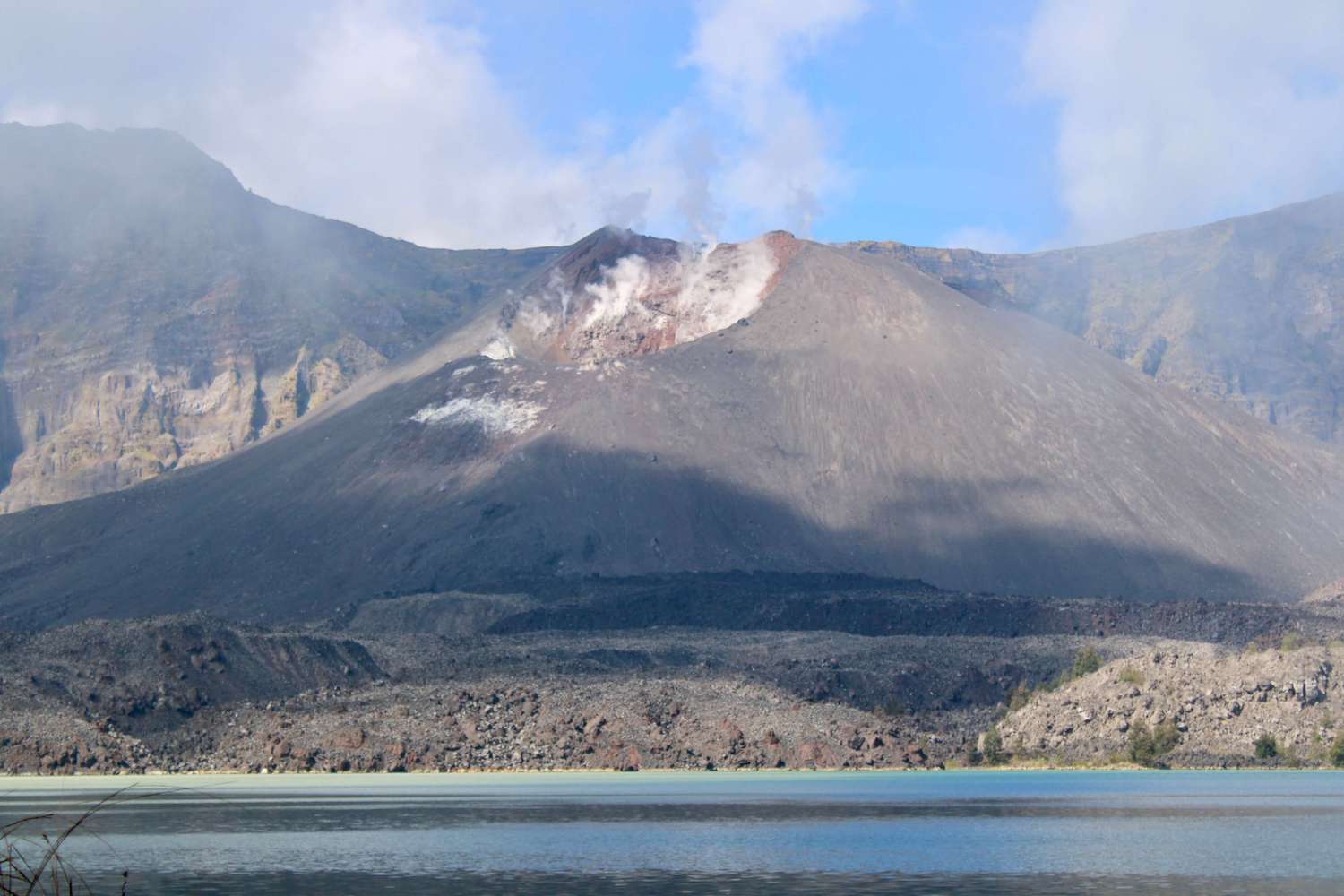 To sum it up

It was the most exhausting hike I have done in my entire life. But it was also one of the most beautiful hikes. So special, the inner struggle you have with yourself because you can't or don't want to walk anymore and still keep going. A hike in which you outgrow yourself and are rewarded with incredibly beautiful views.

Blog post was written by Natalie,
Co-Founder of Roots Lombok.